Since we are about to have our discussion / review or the recent SWTOR Novel “Revan” we are having a little contest. We want to give away a digital copy of Revan through iTunes. Listen to this very short podcast to figure out how to enter. After that head on over to the forums to sign up. Contest submission deadline is 9pmEST December 5th.

One quick note, sorry for telling you about this contest on such short notice. We like to think that it will give our loyal dedicated listeners a slight edge.

Pax Prime is nearly around the corner so we wanted to tell you all about a little event the crew over at Darth Hater is throwing called Community Cantina. Those of you who remember this event from Pax East will agree with me when I say this is going to be more fun than Jabba’s Sail Barge. Well I imagine hanging out on the sail barge would be fun as long as you aren’t killed. Anyways MER will be attending this and would like to invite any of our listeners going PAX Prime (or just in the area) to join us. We would love to meet you. If you are interested additional information needed is posted below.

Individual tabs, food menu available online. Go to their site for a coupon!

Be aware, this event is separate from the official BioWare SWTOR meet and greet on Saturday. See you all there. Leave your lightsabers at the door!

We haven’t even announced the winner of our previous contest and we already have another one for you! We think you’ll agree, this is our biggest yet!

What’s this big prize? How about two passes for PAX Prime in Seattle August 26-28th, 2011? That big enough for you?

Based on our last contest you might expect that we want our constituents to engage in some sort of competition. A prize this big might even call for a duel to the death! It was mentioned, but we decided it might lead to a decline in listenership. Even though this is a huge prize, contesting to win it is very simple. All you need to do is go onto iTunes, write a review for our podcast, good or bad, it does not matter, email us a copy of your review for verification purposes with the title “#PaxPassGiveaway” in the subject line of your EMAIL, NOT in your iTunes review. That hash-tag/pound-sign is simply to make categorizing all the incoming emails easier for us. I repeat, do not use that title in your iTunes review. On the day following the final day of eligible entry, a name from the list of submitted entries will be chosen randomly.

Of course, there are a few things to keep in mind. We are only giving away passes for the event. All other expenses are on your own accord and your own dime. Trust me, if we could afford to pay your way, we’d both be going. Please, only one entry per contestant. Multiple entries from the same email address, or entries from multiple email addresses verifiably belonging to the same person, WILL BE REJECTED. This is not out of spite towards anyone who really wants to win, but to maintain fairness amongst all contestants. This contest is open to all listeners, regardless of geographic location, but again, we are only providing entrance to the event, not a means of travel to Seattle, nor accommodations. We are not Bioware.

If you’ve already entered an iTunes review for us in the past, no second review is necessary. Simply email us with a reference to your posted review (screen name, date of post, & a verifiable email will suffice). You will be eligible just the same as someone who enters after the date of this posting.

Why iTunes and not Zune Marketplace? iTunes has the largest user base of podcast distribution services the world over. Also, having reviews consolidated to one source makes things infinitely easier for us to collate all the reviews. If, for some reason, you’re an Apple hater and you hate innovation, iTunes is free to download, sign up for, use, and, should you so choose, to delete.

If there are any further questions regarding this or any other contests, feel free to ask in the Comments section, in the forums, or by emailing us at moseisleyradio@gmail.com.

(By the way, to whomever wins, I’m jealous. I won’t be going, but you may see Zach there! -Evan)

Alright, we promised on the last couple episodes that we would have some sort of contest by which one of our lucky community members could win a copy of SWTOR: Deceived, autographed by Daniel Erickson and most of the TOR writing team down at BioWare Austin. Well, I can tell you, it’s gonna take more than luck (insert Obi-Wan quote here). Here are all the gory details:

Each participating member of the community may submit a short story about their prospective first character in Star Wars: The Old Republic. Each person’s story could be anything related to their character in-game, but the easiest to write would be an origin story. The story must be no greater than five-hundred (500) words and will be judged by Zach, Evan, & Alan.

The big question, of course, is how do we pick the winner? We’ll base our judgements upon three criteria: Originality, Detail, & Use of Lore (if you’ve seen Iron Chef, it’s kinda the same). Here’s some detail on the aforementioned criteria:

Originality. If their smuggler is named Dan Lobo, his companion is Bewchaca, and they fly the Bicentennial Eagle… yeah, that’s not original. Like, AT ALL.
Detail. “My name is blah blah blah, I’m from Tattooine. I have a gun.” No. The more detailed the story, the better. Points for art as well, though, not so many that good art with a crappy story will fair too well. Ditto for a great story with stick figures; no bonus points there.
Use of Lore. Use of story assets is greatly encouraged, though not to the point of “He attacks with Charged Blast, then runs in and uses Rocket Punch, kills them with Flame Attack, then goes back to his class trainer and gets his new ability!” Sorry, that’s another no-go. Making game assets work within the context of story is a must for using game mechanics. Also, I should mention, you won’t be graded on how closely you follow established continuity. That’s not to say that you can re-write the history of Star Wars, but if you make a timeline error, we’re not going to disqualify anyone. Besides, with the rate at which Lucas invalidates established authors’ work, you might be right today and wrong tomorrow.

To make the scoring interesting, diverse, & fair, each criteria will have it’s own grading scale. Originality will warrant a point scale of 1-10, Detail 1-5, & Lore 1-5 (again, very much how Iron Chef does it. I love Food Network).

Again, the grand prize is Star Wars: The Old Republic “Deceived” written by Paul S. Kemp and autographed by the SWTOR writing team, including Daniel Erickson, Hall Hood and a few other SWTOR members of the writing team. We would also like to feature the top three entries on the front page of the website, and, as each community member pleases, we could have a forum thread in which everyone can share their creations. Please only one entry per community member, though if your household happens to have more than one community member each one may enter. Submissions may begin June 1st 2011 and will run through July 1st 2011.

We’re looking forward to reading everyone’s entries! Jedi, Sith, Trooper, Agent, whatever you’re gonna play on Day One, we wanna read about them here first! May the Force be with you (and your word processor!).

Email your stories to moseisleyradio@gmail.com and include #MERContest in the title.

The new trailer has been added over at SWTOR.com. 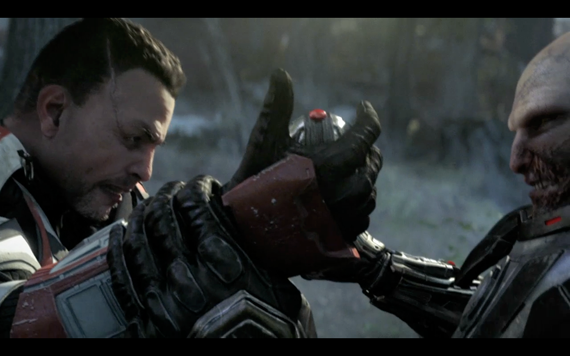 The video was created by BLUR, the same production company that worked on the “Deceived” trailer.