EA just wrapped up their press conference at the Orpheum Theatre in Los Angeles. The presentation included a number of games including relaunches of the Need For Speed and Medal of Honor franchises. Of course, we watched with bated breath for Bioware’s presentation. What did we get? The team showed off the new “Hope” trailer that was teased last week. The video is set on Alderaan and pits a Havok squad of troopers against an unmasked Darth Malgus. It was far and away one of the most exciting pieces of video game cinema seen since, well, the Deceived trailer! We’ll be sure to post a link to the video as soon as it goes live on the web. The second reveal of the presentation was a bit more gameplay oriented… 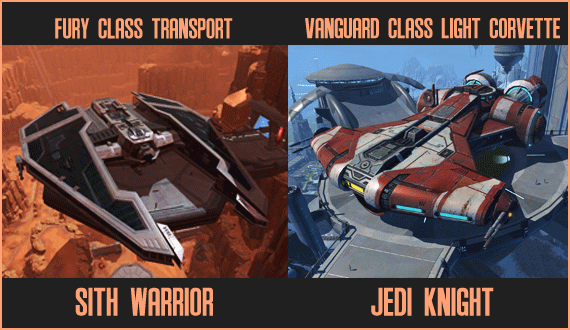 Player ships! LucasArts’ Mary Bihr and Greg Zestra from Bioware showed off two ships that will provide “a home for a player to use as a base of operations, from which to explore the galaxy.” The first of these is a ship for the Galactic Republic, not too-dissimilar from the Corellian Engineering Corporation’s XS-800 light freighter and the second is an unknown Imperial ship (similar look to the VCX-820), called a “Sith Inerceptor” which obviously takes visual cues from the later-introduced TIE series of ships. While there was no direct mention of space combat, this confirms that we will at the very least see a ship system on par with Knights of the Old Republic and the Ebon Hawk. Zestra finished the note on ships by saything that “we want a player ship to represent not only a right of passage in the game, but also a representation of their personal style.” 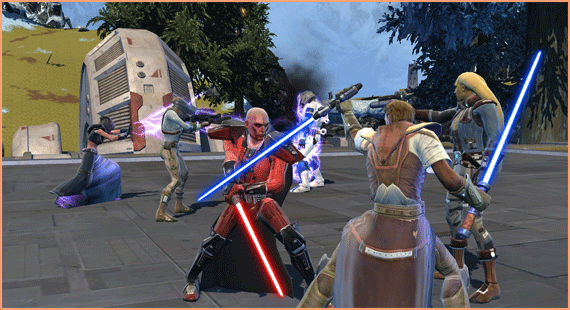 The second “reveal” is player versus player combat, or as it will be called in The Old Republic, “Warzones”. Little details were mentioned during the press conference, but Greg Zestra told the audience that “players will experience fierce battles that evoke the memories of famous Star Wars ground conflicts.” We did, however, find out that the first of these warzones to be revealed will be set on Alderaan. Press will be getting hands-on with the most recent builds during the week, likely showing off player ships and warzones, and we’ll keep you updated of those as well. 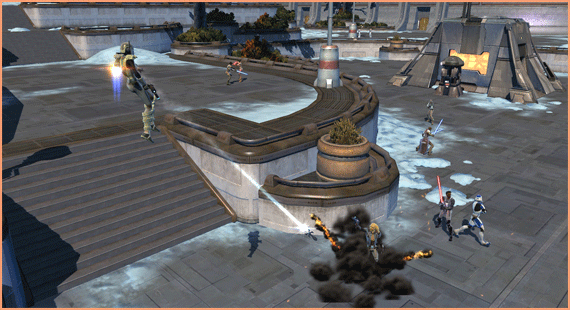 Update: In an interview with 1UP, Blaine Christine confirmed that other players will be able to come aboard your ship. He noted, “It’s your hub of operations; it’s your home within the game world. It’s where you come back to after a mission; it’s where you have deeper interactions with your companion characters; it’s where you store your gear or equip yourself out before adventuring again. But since this is a massively multiplayer game, it’s also a place where you can bring your friends.”